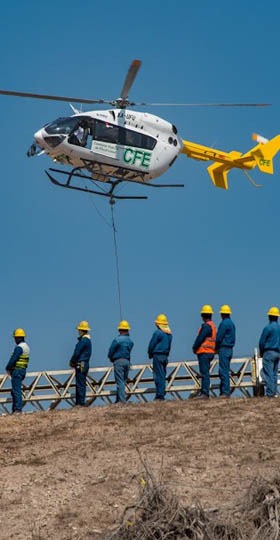 The first investment trust in energy and infrastructure specialized in the energy sector in Mexico (Fideicomiso CIB / 2919), CFE FIBRA E establishes solid corporate governance mechanisms to 1) provide stability to CFE FIBRA E investors with respect to the risk of unilateral decisions that could affect it and 2) align the interests between the actors involved, including investors. For this, the Technical Committee is made up of most independent members with a solid professional trajectory in key sectors such as: energy, private and public finance, infrastructure, among others.

Economist at the Autonomous Technological Institute of Mexico (1976) and the University of Chicago, where he obtained a Master’s degree (1978) and a doctorate in economics (1979).

During his professional career, he has combined private practice with public service. Between 2003 and 2006 he served as Deputy Director of Technical Assistance and Training for the North American Development Bank.

Between 1990 and 2003 he collaborated as Project Director Partner and later Director of GEA Grupo de Economistas y Asociados, a consulting company and economic and political analysis in Mexico.

He has been coordinator of the finance area of ​​the ITAM Administration Department (1979-1980) and professor of various subjects at that institution. He has also taught various courses at CEMLA, INAP, UIA and UMI.

He is a director of Grupo Corvi, Valores Finamex, Seguros Tepeyac, IXE Investment Committee, Nafin Advisory Council for Mexico City and Grupo Medicus. Former director of Banca Promex, Afore Santander and the Risk Committee of Bancomext. He is an editorial writer for the Business Section of the newspaper Reforma and a contributor to Dinero y Poder on Channel 11 and Foro TV.

Miguel Alejandro has a degree in Economics and Finance and a Master in Public Policy from the Ibero-American University of Puebla and has participated as an advisor to the parliamentary group of the Labor Party in the Senate of the Republic on energy and public finance issues. He was coordinator and teacher of the Bachelor of Economics and Finance at the Universidad Iberoamericana de Puebla. He has served as a researcher at the Salary Observatory of the Ibero-American University of Puebla and Mexico City. In addition, he has several academic and scientific articles published in academic journals refereed by CONACYT. He has participated as a guest in various conferences and seminars where he has addressed issues of exclusion, social mobility, nationalization and reprivatization of banks, poverty, wages, public policies, etc. Previously, he had served as CFEnergía’s Director of Energy Intelligence.

Noé joined the Federal Electricity Commission (CFE) in 1976 as a project supervisor. Since then, he has held various positions in the company such as Director of Transmission and Transformation of the Northeast and Deputy Director of Transmission. He is a Telecommunications and Electronic Systems Engineer from the Instituto Tecnológico de Estudios Superiores de Monterrey (ITESM).